This site was sold by Simeon Danforth in 1827 to Dr. Thomas Wallace, and he built the house and lived there for two years. The history of this house with its unusual architecture is so bound up with that of the James Carson house on Thornton Street that they should be mentioned together. It is probable that Dr. Wallace also built the Carson house, and Captain Millet lived there for a while, occupying it from 1829 to 1831. The two families were very good friends, possibly being acquainted before coming to Derry.

The Wallace's name a little son "Abram Millet" and the Millet's reciprocated with a daughter "Martha Wallace" named for the doctor's wife. Evidently Millet, who was a retired sea captain, made some changes in the house after purchasing it, unless Dr. Wallace built it according to the Captain's specifications, for it has always been a tradition in the Village that it's present form was a reminder to the captain of the deck of a ship, as reproduced by the set-back of the second story. Captain Millet's granddaughters say that he took out the square-cornered flight of stairs and replaced it with circular stairway, which was evidently changed back again, perhaps by the next owner, who may have had no sentiment about ships.

In early days there was a lattice arch over the front walk at the gate, (for almost every home had a fence in front) and from this arch hung a wooden lion, perhaps 15 inches by 12 inches, which had one time been an ornament on the Captain's ship.

Captain Millet died in 1851, and his widow soon sold the house and left town. Nathaniel Hooper and John P. Nesmith were the next two owners. During the ownership of the latter, the house was occupied by the family of his brother, Albert, whose six children, Mary, Louis, Clarence, Frank, Caroline (known as Lily), and Rose, were contemporaries of some of our older village residents. Mr. Nesmith was Mrs. B.F. Parsons' cousin, while Mrs. Nesmith was a sister of George F. Adams. Rose was to become the mother of mRs. Katharine MacGay, at present the principal of Rogers Hall School in Lowell, Massachusetts.

In 1875 Reverend Robert W. Haskins purchased the house and lived there briefly, although he owned it until 1898, during which time it was occupied by his brother, William H Haskins, who was for many years the deacon of the Congregational Church, a devout man who took his religion seriously. In 1913 the Hood Company bought the place, on of their known tenants being Noble Adams. John W. Barrington owned it form 1924 for 15 years, selling to Thomas O'Gara, who transferred it to the previous owners, the Wilders. 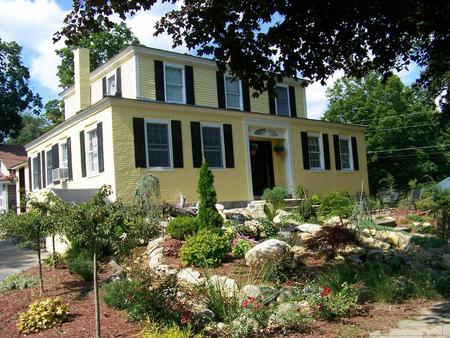 It was on Mother’s Day weekend in 1990 that Shelly Devlin finished remodeling her Kendall Pond home basement and opened her doors to the Water’s Edge Salon. With an immeasurable amount of inspiration and passion for this industry, Shelly had only begun her dream. She raised her business like a garden. Shelly dug deep to find the richest soil, so when she finds a passionate seed, she can offer it a home. She waters them frequently with continuing education, and fertilizes her team with inspiration.
The Water’s Edge Salon outgrew Shelly’s basement and in 1995, and she moved her team and her customers to Hudson. Shelly doubled her staff and began offering spa services. As she continued to seed and water her garden, her business continued to grow.
On Mother’s Day of 2000, The Water’s Edge Salon & Spa took a huge leap to Londonderry. Doubling in square footage and tripling in staff, Shelly saw all of the beautiful colored flowers blooming.  The Water's Edge spent 10 years in Londonderry, but they were missing something untangible. They had a team of talented technicians and loyal customers for over 20 years, but the environment was not quite perfect.
In June of 2010, a new journey began. Their path traveled its way back into a house in order to regain the warmth and comfort that a home provides. From the water garden in the front, to the dragonfly door bell…it is the complete ambiance of the 19th century home on 128 East Broadway in Derry.
In September 2016, long time employee and friend became the new owner of Water's Edge Salon & spa. As from the first day the doors opened in 1990, The Water’s Edge vision remains the same. Our success comes through listening, understanding, caring and providing the best personal service in spa care. Our team continually keeps up to date on their education, to stay current with trends and styles and to pass those talents on to our customers. At The Water’s Edge Salon & Spa we help you pursue the care of your inner and outer beauty.